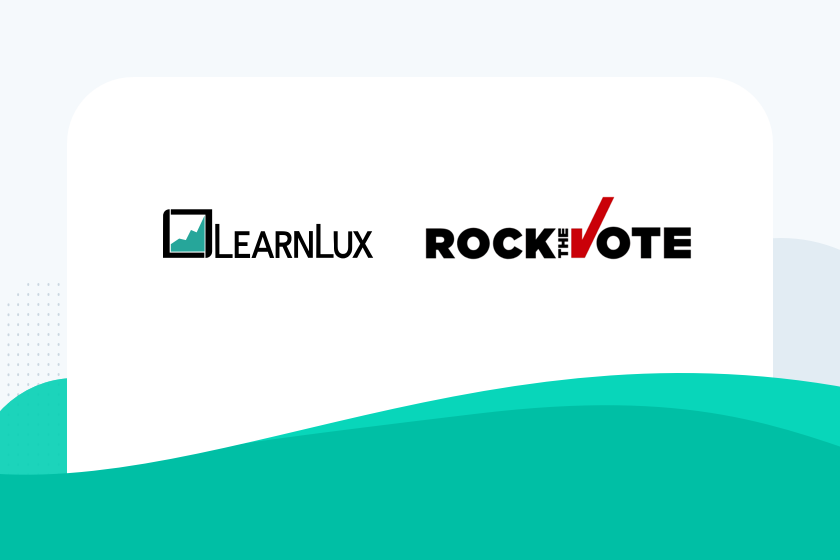 Have money goals? Head to the polls like your financial future depends on it! LearnLux is proud to announce that we've teamed up with Rock the Vote on a mission to empower thousands of employee voices to be heard in the upcoming election this November.

According to survey data released this past January, nearly 75% of Americans believe whoever is elected to the White House will have a direct impact on their personal finances. And, one in three is putting off a big financial decision until after Election Day. By teaming up with Rock the Vote, LearnLux will empower employees and employers alike to understand the importance that their vote has on their overall financial wellbeing.

“The outcome of this election will impact every American’s financial future,” says Rebecca Liebman, CEO of LearnLux. “Money consists of a lot of moving parts – student loans, your wages, the unemployment rate, taxes, healthcare, retirement, and many other issues. It’s important for every one of us to register to vote, educate ourselves about what’s on the ballot, and let our voices be heard.”

In partnering with Rock the Vote, LearnLux has provided a way for users of our financial wellbeing program to register to vote in under two minutes on a mobile-friendly platform that’s available in 13 languages. This initiative aligns with the many modern workplaces that offer financial wellbeing benefits and resources like paid time off to vote, rides to the polls, and other pro-democracy and pro-voter benefits that build their employer brand.

Beyond registering to vote, employees can use LearnLux to prepare for their financial future by taking advantage of digital education, interactive tools, and access to Certified Financial Planner™️ professionals for guidance. No matter what happens in November, helping the American workforce feel financially resilient is essential.

About Rock the Vote

Rock the Vote is a nonpartisan nonprofit dedicated to building the political power of young people. For nearly 30 years, Rock the Vote has revolutionized the way we use culture, music, art, and technology to engage young people in politics, registering and turning out millions of young voters. During the last seven Presidential elections, Rock the Vote and its partners coordinated the largest voter registration drives for young people that added nearly 8 million new voters to the rolls and consistently turns out its voters more than 30 points above the national youth average. Rock the Vote fights for voting rights to ensure that all eligible voters can exercise their right to vote and promotes civic education to ensure young voters to have the resources and information they need to participate in our civic process. Learn more at rockthevote.org.

Empower your employees' personal finances, too.

Tell us about your company, and we'll work together to find the best fit for you and your team.